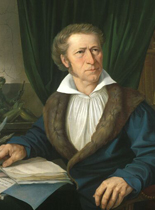 Eichhoff had made his career as a merchant, but entered the administrative power during the French occupatoin of the Electorate of Cologne. By 1811 he became the General Director of the central authority of the Rhine Octroi in Cologne. At the Congress, Eichhoff stronlgy lobbied for a liberal reorganisation of the Rhine on the basis of the previous Octroi regime. Eichhoff and the Dutch representative at Vienna Van Spaen developed a strong connection while at Vienna. They stayed in close contact, as Van Spaen expected Eichhoff to become an authority for the special River Congress Commission that was to be installed. Was a German cook, merchant, economist, servant of the Napoleonic administration in Bonn and General director of the Rhine Navigation Octroi in Mainz, a precursor of the CCNR. During the Congress of Vienna in 1815, Eichhof was the expert invite on Rhine navigation. He strongly influenced the Special Congress Committee on River Navigation. He was in favour of the installation of a liberal Rhine system based on the Octroi regime. Yet, he did defend the practice of compulsory transhipment at the old cities of Cologne and Mainz on the basis of practical necessity and safety for navigation. After the Congress Eichhoff was the designated expert to consult the CCNR. He was consigned to establish a regime of interim regulations for the navigation on the Rhine between the Swiss and the Dutch border, until the members of the CCNR would reach a definite regulation that would include the Dutch parts of the Rhine. Despite his ambitions, Eichhoff would never become General Director of the CCNR.